Hanan is invited to an internal meeting at the refugee center, together with staff and a few refugee representatives. She didn’t expect an invitation, but she was told she was chosen as a female representative for the refugees, based on her experience as a restaurant manager in Syria..

Hanan: The team leader opened the meeting and he posed some questions to the group. Different staff members started to talk and they discussed a lot. Everybody wanted to say something and the discussion went on for a long time. At a certain moment the team leader also asked what I think and I felt that I was finally able to say something. But immediately one of the staff members said that it’s not true what I said and the discussion continued. It was a chaotic meeting and I don’t understand why the team leader doesn’t take control.

Team leader: We want a good representation of the refugees at the table. No woman had volunteered, so we asked Hanan. She was quiet, so I’m glad I asked for her opinion separately. All in all it was a fruitful meeting and we received several ideas with which we can work.

Most people in the Netherlands think everybody should take part in decision making. Many people want to give their point of view and they also want to hear everybody else. That’s also why Hanan is invited, since there was no woman refugee represented. During meetings, Dutch try to reach agreements. A decision is only taken once everybody’s been heard. To reach this, there may be a lot of direct discussion, with arguments and counter arguments. Conversation provides clarity for the Dutch and they pay attention to who agrees with them or not. To other people this way of decision making seems often harsh and disorganized.

Next time, Hanan can try to participate in the exchange of different points of view more, even though this may feel unnatural for her, coming from Syria. She may try to repeat her point of view, possibly come up with another reason for it. She may also show if she doesn’t agree with something said by somebody else (by nodding her head for instance). Also, the team leader should have started the meeting with a few comments how meetings differ across cultures and explain that in the Netherlands, it’s an opportunity and invitation for all attendees to give their opinion and speak up. In every multi cultural team, it is important for a team leader to make sure all opinions are heard and listened to. Every voice counts.

In decision making, one can recognize the feminine side of the Dutch (low MAS). The involvement of everybody is very important to them. The Dutch are more focused on the process and less concerned with quick, result oriented forms of decision making. On top of this, in a feminine society people feel motivated if they have contributed. The emphasis on inclusion, participation and talking until a consensus is reached, are all feminine characteristics. The Dutch use the word ‘polderen’ to describe this cultural value.  Combinations of low PDI (the leader is a coach rather than a director), high IDV (direct communication), and low MAS creates meetings such as the one Hanan experienced. 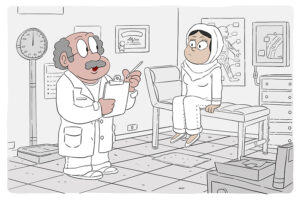 Suhana and the doctor
Suhana, who is from Malaysia, has had continuous headaches for…