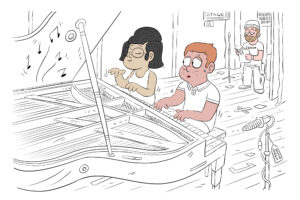 Sumiko and Vincent are a piano duo. They are very talented and have performed in many countries. Sumiko is from Japan, Vincent from the Netherlands. They graduated from the Conservatorium in Amsterdam and decided to become a professional duo.

Sumiko: My education in Amsterdam has been a cultural roller coaster. In Japan, learning to play an instrument is a full-time job, a tough one. Expectations are high and the competition is fierce. My parents and all my teachers had only one thing in mind: to make me be the best piano player. My parents were very proud of my progress. I started performing at a young age and soon became the star of the family and town. My parents were very focused and saved every penny to send met to the best teachers and eventually abroad. They expected the same focus from me. In Amsterdam I met many Dutch talents such as Vincent. Vincent is a prodigy. It surprise and annoys me how relaxed the Dutch are with ambition and achievements. We were at Carnegie Hall recently and after two, admittedly good, rehearsals Vincent decided it was time to check-out the City! I couldn’t believe it and got very angry. After all,.we had to perform at the highest level the next day!

Vincent: Sumiko is such a bright performer. She is not only talented but a very hard worker. In our duo she is the tough one. Working long hours and being very demanding with those we work with. Sometimes I tried to slow her down a bit, but I learned the hard way that that is not an option. She is on a mission. Recently we were in NYC; chance of a life time to experience the City, but for Sumiko all that counts is the piano! There is more to life than the piano, right? We do our best, nevertheless. Anyway: in spite, or maybe because, of our different views on accomplishment, we are a great team together.

Sumiko came to Amsterdam expecting the same focus on performance and achievement as back in Japan. She was supported by a number of international students, in particular a few from the United States, South Korea, China and Poland. But the Dutch and Swedes were different. They seemed to have less focus. Not at practices, but they just seemed less interested in putting in long hours. Be the best or try your best?

Sumiko and Vincent are a great Duo and they have found their way around differences on the road to success. Sumiko realizes that Vincent is not only motivated by his success, but also by the quality of his friendships and after work life. This fulfillment has helped him become successful. Vincent accepts that Sumiko’s, in his eyes, extreme focus on her work is something she finds fulfilling. The least he suggests her to relax a bit, the more often she shows up unexpectatly at the pub, albeit it for one beer only.

The way people are motivated changes from one culture to another. In some cultures, like Japan, the United States, South Korea, China and Poland people tend to be focused on achievement, being the best. The best deserves admiration and it is accepted that the winner takes it all. Their view is often that you live to work. In other cultures, like the Dutch and Scandinavian, it is accepted and encouraged to try your best. The best will deserve admiration if he or she shares the success. Their view is that often you work to live. 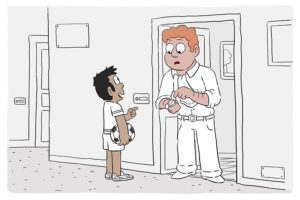 Juan Carlos at the door around dinnertime
Juan Carlos really enjoys playing soccer, even before he moved…