Alexei has played football all his life: at school, on the streets, and at a football club in Novosibirsk, his hometown in Russia. He is skilled and has good technical abilities. In the Netherlands, his father has arranged a place at a club for him.

Alexei: I love football and when we left Novosibirsk I really missed my football friends on the street. I was happy to start with a new club and my father told me that I am a good player and the coach would see that too. All I had to do is listen to him. The coach asked what position I like to play and then told me “OK, that’s fine, just play there”, and that was it. He just stood on the side with his arms crossed. And since there was no instruction from the coach, my teammates began to criticize each other and me a lot. They yell and scream at each other all the time. It really hurts my feelings. I love football but this is no fun!

The Coach: Alexei is a player with great individual skills. Better than most team members. He doesn’t need much coaching from me, because the players in the field can tell each other what to do. However, sometimes Alexei seems to give up. It seems as if he can’t take any criticism.

Alexei is used to getting specific instructions from his father, his teachers, the coach, etc. As far as he knows, the coach is the boss and has to instruct the players and the team. So Alexei waited for him and looked to the coach to see if he missed something. Yet the coach was quiet and allowed the players in the field to “coach” each other, which were often  blunt and painful comments. The coach wants the players to show initiative in the field because he believes he cannot anticipate every situation. He wants players to “think on their feet”, and to help each other. In Dutch culture, the “help” that players give each other is not meant to be painful.

It is wise for Alexei to be open to the comments from his teammates and listen to them as directions which are not meant to be harsh or insulting. He might try to express his own thoughts as well, and tell his team mates that this is a different way for doing things for him. The coach should be aware that Alexei is used to directive coaching and explain how he coaches (and why): this explanation will help Alexei transition more smoothly into the team.

The Netherlands is a very egalitarian and a very individualist culture. (PDI – and IDV ++). Everyone can constructively criticize everyone. The Dutch want to keep their teammates “sharp” , i.e. focused, in order to get the best results, as a team. The criticism is not intended to be  painful or personal. Getting used to the directness of the Dutch is a major challenge for foreigners. They often take it as a personal insult, while the Dutch believe that their “honesty” (i.e. directness/bluntness) is the best way to help others. 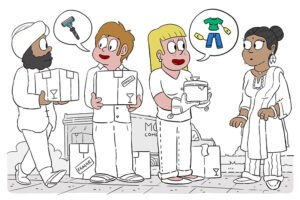