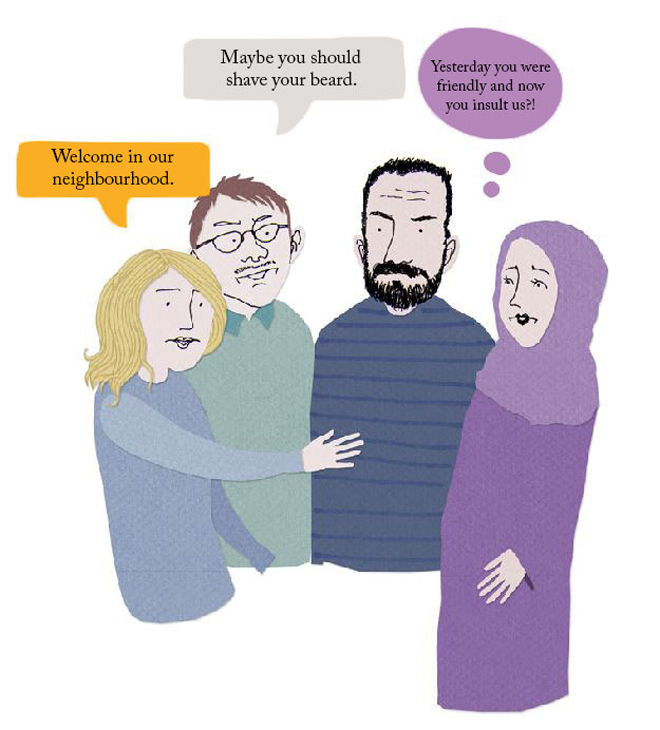 Mahmoud and Amira have moved with their daughter into their first house in Luxembourg and Mahmoud has started a small shop. They get into contact with their new neighbors Kees and Annie who are from the Netherlands.

Amira: Kees, the new neighbor, has come to help us to carry our belongings into the house and Annie, Kees’ wife, even has brought some soup to eat. That was really nice and that night I told my husband that we were lucky with such friendly neighbors. But the next day Mahmoud came back angry from the shop. Kees had passed by and told him he should shave and remove his beard! And yesterday Annie said that my dress wasn’t good enough for this neighborhood! When I explained her that my dress is part of my religion and of me, she didn’t even react. I feel insulted by these people and rather keep some distance.

Annie: We have new neighbors from Syria and wanted to help them integrate Luxembourg. We’ve helped them on the first day of moving in and we had a good atmosphere. However, the man, Mahmoud, opened a shop but with his black beard he scares customers away. And I’ve tried to tell Amira that if she adjusts her dress somewhat, it will be easier for her to be accepted in the neighborhood. But she thinks her religion is more important so I don’t know how these people will integrate into our society and I’ve let go.

Kees and Annie were trying to help and to explain how things work in Luxembourg, a country they had moved to some years ago. They may have no idea that their statements were insulting for Mahmoud and Amira. The Dutch have a very direct way of communication: they say things rather bluntly. Often, they try to be helpful but in the process they step on people’s toes. Besides this, as foreigners themselves, some people feel that immigrants could adjust more to the way the local people behave and dress.

For Mahmoud and Amira there are several ways to react to the statements which were made by Kees and Annie. It is possible to make a little joke (‘I look ugly without a beard’) or to say ‘thank you for your advice’. Sometimes it is possible to consider the advice: Kees and Annie are probably trying to explain something which is important to them. Kees and Annie, on their turn, may try to understand that their statements can come across as intruding or insulting. In case you feel that it is impossible to agree on something, then it might be best to give it not too much attention. Try to find some other things to talk about. This is true for all parties: it is okay to disagree on certain things.

Mahmoud and Amira are from a collectivist culture, while Kees and Annie are from an individualistic culture (IDV +) and live in a country with an individualistic culture (IDV +). This means that Kees and Annie are rather direct, sometimes blunt in their communication. They prefer honestly and clarity above the risk of hurting anyone. Besides, some people in Luxembourg which is already very multinational feel that their way of living is being threatened by the arrival of refugees and immigrants. In collectivist countries (IDV -) the honor of the family may be of high value and if outsiders comment carelessly on this, it comes across as insulting and intruding.