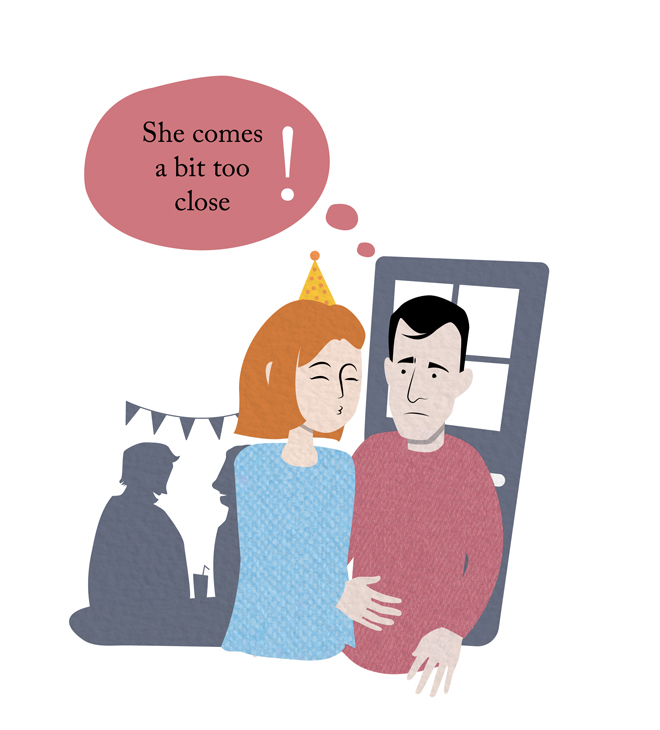 Karim has been invited to a birthday party at one of the new Luxembourgish neighbors, on a Saturday afternoon. When he arrived, some family members and friends are already gathered in the living room.

Karim: I didn’t know most of them, so I shook the hands of everybody present and introduced myself. When the next guests arrived, I noticed that some people kiss on the cheek and others shake hands. When I decided to leave after a while, the neighbor’s wife thanked me and kissed my cheeks three times. I was confused – a woman kissing a man with everybody present, what does that mean? Fortunately, the neighbor just shook my hand.

In Luxembourg, a mix of greeting gestures are used and at first it is normal to be confused. Even among Luxembourgers confusion arises at times, whether people will kiss each other or not. It depends on the closeness of the relationship and on the country of origin. The neighbor’s wife probably just wanted to be friendly and expresses this by kissing him goodbye.

Here some rules.
At work: All people typically shake hands, especially when they meet for the first time. After that, handshaking is sometimes done at the beginning of a formal meeting, but usually not; colleagues just say hi to each other in the morning.
In private: Men shake hands with men.
Women shake hands if they meet for the first time.
Women can kiss on the cheek 3 times, with men and with women if they know each other better. If you kiss cheeks, you don’t shake hands as well.
The difficulty is to determine whether you know somebody well enough to kiss cheeks – it is wise to let the local person take the initiative.
French, Belgians, Italians, Spanish and Portuguese tend to kiss when greeting.
Germans and people from the Nordic countries tend to shake hands.

Luxembourg is a mixture of many cultures, hence it is important to include everyone. In this story, it means that everybody is greeted upon arrival and when leaving.
The Luxembourgish culture also has little need for hierarchy (PDI -), so everybody is treated alike and quite informal, in social etiquette: Everybody is greeted in the same informal way, regardless of position.
The handshake is a more formal greeting, which is applied in business environments and when meeting for the first time.
When getting more familiar with people, the formal greeting can be changed to the friendly kiss on the cheeks. However, the kisses are only used if one of the two people is a woman. Two men don’t kiss.