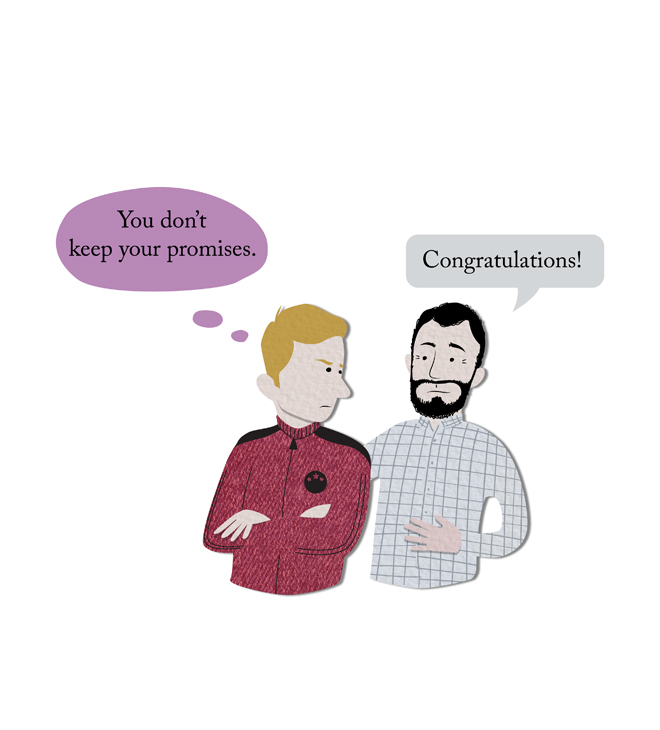 Zaid has taken up some voluntary work at the football club of his son Nabil. He helps out with the training and he can get along very well with the trainer Bart. At some day Bart tells Zaid that he’s getting married and he invites him to the wedding party.

Zaid: I felt very happy for Bart and of course I told him I’d be pleased to be there. On the day itself my brother Mahmoud surprised us with a visit to discuss some issues and it was impossible for me to go to the wedding. I saw Bart the following Saturday and congratulated him with his new wife and explained what happened. But he reacted irritated. What kind of friend is he if he cannot accept my explanation?

Bart: You see, you can’t trust these people. First he reacts very enthusiastically and promises to come and then he just doesn’t turn up. I had told my family that he would come and had arranged a seat at a nice table for him and then he’s not there, not even a phone call! He embarrassed me. Imagine, I really thought we could be friends!

In the Netherlands ‘a deal is a deal’. If you say yes, then people expect you to do as you promised. Bart probably thinks that Zaid doesn’t appreciate the friendship or he might have the feeling Zaid is not reliable. Also it is strange to him that Zaid’s brother just turns up and changes the plans for the day. In the Netherlands you arrange beforehand (often weeks beforehand) if you go and visit someone (even family) and people stick more to their plans.

If Zaid finds a possibility to attend the wedding as planned, he should do his best to do so. It’s good to understand that his newly found Dutch friend may find this very important. If he really can’t make it, at least he should call or text-message to apologize and explain his absence. Bart may realize that this situation may not say much about the appreciation of Zaid for him as a friend: saying yes to the invitation (even in case Zaid had known beforehand he couldn’t make it) could be interpreted as a good intention, a contribution to the friendship.

The Netherlands has an individualistic culture. Zaid is from a collectivistic culture. In a collectivistic culture people like to say ‘yes’ because they include themselves within the collective with it; they say ‘yes’ because they intent to come or they want to show they support the marriage and the friendship. Saying yes in itself is a contribution to the friendship, whether you’ll make it or not. In the individualist country of the Netherlands, the ‘yes’ is a promise that you need to keep. It is only felt as a contribution to the friendship if you actually do as you say. If you know beforehand that you can’t come, it is best to say that you’re sorry but you can’t come. People can’t fall back upon a collective, a group, that will always support them: they need to rely on individuals. So ‘walk the talk’ (do as you say) is very important to them.