The digital world is such a mix of cultures, it’s basically culture-less. It’s an equal society where people of all cultures can both knowingly and unknowingly communicate. We can imagine how this can be intentional, such as Amazon (an American company) coming into the Egyptian market, or unintentional, such as a little Japanese boy who posts a video about his favorite manga on Youtube only for it to be watched by a little boy in Argentina who loves Naruto just as much. 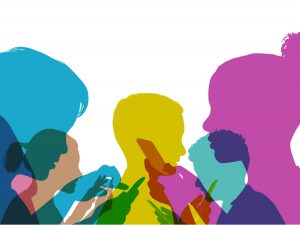 You can’t always tell who is your audience; who is on the other side of the screen.

In order to successfully connect to an audience, one needs to be able to first communicate with them in a way that they can understand what you are saying. In general, if you speak to someone in French, but they only speak English, or Arabic, or Korean, Swahili, etc… Can one really say that one is communicating? In our digital communications, we even have emojis to help us be understood. Language is the vehicle, but there are also perspectives and cultural differences. One must respect where the other is coming from if we want to enter a dialogue and get our point across. First, people must get on the same level of general agreement that they are each being understood. If we all have a general understanding of this concept, we can bring empathy into our conversations and arrive at a starting point for discussion.

Consider what is the topic that you want your audience to understand? How can you present it in a culture-less way? To the best of your abilities, of course 😉

This is where building up one’s intercultural competence skills comes in handy, specifically in the context of digital interactions. Learning how to communicate objectively and without cultural bias can ensure success in your online conversations, no matter the audience.