Juan Carlos really enjoys playing soccer, even before he moved with his family from Mexico to the Netherlands. He has joined a club and also plays outside on the street a lot. He has met a few boys in the neighborhood that often play soccer as well.

Juan Carlos: One afternoon, I wanted to ask one of the boys to come out and play soccer and rang the doorbell at his house. But his dad opened the door, he looked angry and asked if I knew what time it was. I did: it was six o’clock. I was told that my friend could not come out at this time and his father shut the door.

The father: Everybody in the Netherlands has dinner at six pm. This is an important time for the whole family, so we don’t want to be disturbed. It’s not okay if somebody comes to the house to ask if my son can come out to play.

In the Netherlands, the days are pretty organized: Lunch at 12:00, Dinner at 18:00 and nighttime starts at 22:00, after which noisy activities are not appreciated. Everybody is expected to know and respect these times. This also means that if you’re invited to an event between 12:00 and 18:00, you can expect coffee and cookies, but definitely not a meal. In many other cultures, such as Mexico, the daily schedules are less strict; food is also often shared with guests. For example, dinner times in countries around the Mediterranean are generally later in the evening than in the Netherlands.

Juan Carlos should understand that there are times which are reserved for family meals and other activities in the Netherlands. He should visit friends either before or after these times. Should he forget and go to their house during dinner, he can always ask whether his friend could come out after dinner. Also, his friend’s father could invite Juan Carlos to dinner one night, allowing him to see first hand why supper time is so valuable to the Dutch.

Individualistic cultures as in the Netherlands know a task-oriented perception of time and communication. That means that the day is divided into tasks, each with a specific duration assigned: appointments, leisure, work, and meals. These times are generally expected to be understood and respected by everyone.

Collectivist cultures such as Mexico don’t know such strict time planning. Interaction is about establishing relationships and that does not adhere to schedules. Therefore, the daily schedules are less strict and more flexible, depending on circumstances. 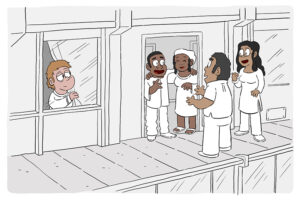 Talk, sound or noise?
Adebiyi and his wife Adeola have been in the Netherlands…